In this page, I‘ll show you where to get board games in Tokyo.

You don’t have to worry about language.

Many multi-lingual version board games with attached Japanese manual are sold in Japan.

Since the release time is different in Japan, you may get a rare game.

Akihabara, the sanctuary of subculture. Not only NES and Super Nintendo retro games and character figures, but also board games are available.

It is on the second floor of a building located on a side road from Chuo-dori, which is a main street.
You can get used games as well as new games here.
Please note that there are many Surugaya in Akihabara.
Go to a trading card & board game store.

There are several Yellow Submarine stores in Akihabara.
You can also get used items here. There is also an hourly play space.

There are also shops where you can buy board games in Shinjuku, a popular tourist spot. Why don't you stop by while you are sightseeing?

A shop located a few minutes walk from Shinjuku station. You can get both new and used ones.
Yellow Submarine accepts consignment sales of products made by Japanese board game circles, and you can also get doujin games.

A shop located a few minutes walk from Shinjuku station. You can get both new If you go to the Yellow Submarine Shinjuku store, be sure to stop by Yodobashi Camera, which is very close to there.
The board game department is on the 3rd floor. The lineup of multilingual versions of German board games is small, and many are lined up with localized products in Japan. Not only German board games, but also many toys such as balance games from Japanese toy makers are available.

If you can leave the Shinjuku west exit area where the above two shops are located, Surugaya Shinjuku is also recommended. It is a large store on the 5th floor in the building. There are many used stocks as well as new ones in the store.

Famous shops that have spread the appeal of board games in Japan from early on.

When you come to Japan, why not visit the board game shop introduced here.
It must be a different sightseeing experience than usual, which is not listed in the guidebook.

This is a game in which a Cthulhu element is added to the pandemic of a cooperative game.

There are four areas. There are four types of player cards. They are not separated into cards for each space.
In the original pandemic, cards are prepared not only for areas but also for each space (each city). And only the cards of the city where the players are located could be passed between players.
In the Pandemic Reign of Cthulhu, players can hand over cards of its area if they are in the same space.

you have to attack 3times to defeat it.

The number of actions is reduced by one, and the role card is flipped over, limiting special abilities and acting eccentricily.

When Old One comes back, there will be some disadvantages for the player,
Since the Old One used each time is random, the game development will change significantly.

There are many types of special cards called Relic cards.
We mishandled it (I must first mixed some of the relic cards into the player card deck, but I didn't do that.)

When I played this with the rule that I can get a relic card only when I defeated shoggoth, I could not clear it at all. With proper rules, the winning percentage has stabilized a little.
(Especially magicians have become useful.)

Also, the change in development by Old One is interesting.
This is especially evil. YIG. Both of us will never forget his name lol

We originally needed 5 player cards to block the gate. YIG is a villain who increases it to six.
In a game where this guy is revived in the first and second cards in the early stages and there is no detective (one less player card than usual to block the gate), the world dooms for collapse.

Isn't it impossible to collect 6 cards even though the hand limit is 7 cards?

We can enjoy different developments each time, and each game takes 3-40 minutes, so we can play many times overnight. That's why it's been a long-loved game.

This was Cthulhu's debut for us.

I haven't read Lovecraft's work yet, but board games such as Mansion of Madness and Cthulhu realms are on the rise in our homes.

I enjoyed it without any previous information about Cthulhu, so I think it's good for those who have never experienced Cthulhu. 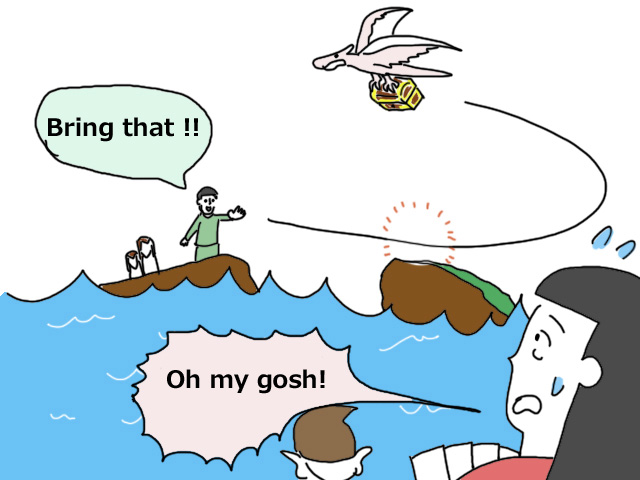 A two-player card game.
Each player plays a card in each deck of the same card composition.

The players take the cards played on the board. The winner is the one who gets more points of the cards.

Play cards alternately on such a board.

You can get cards with these rules.

Cards of the same type can be played together at once.

The game ends when the ship departs three times or either deck runs out.

I can't remember many things, so I play this game with the card composition information aside.

This is a game that seems to be deep when trying to dig into it.
We play this casually.

When I play "Dragonheart" intuitively, things below often happens.

Once cards is taken out by an opponent, other cards are taken in succession.
However, there is also a change of offense and defense between one game.

This momentum shift is good and interesting.

This is an important point when taking a dragon figure that increases the number of cards in your hand.
It is a big advantage if you can keep mounting so that your opponent can not take the dragon figure.

The joy of taking what has accumulated is great.

When I play this game, actually I don't feel the theme or story, so it's not a super-ideal game for us.
However, it's a well-balanced game, so it's fun to spend time.
Sometimes I take it off the shelf and play it.

You can play it for free at the board game arena. 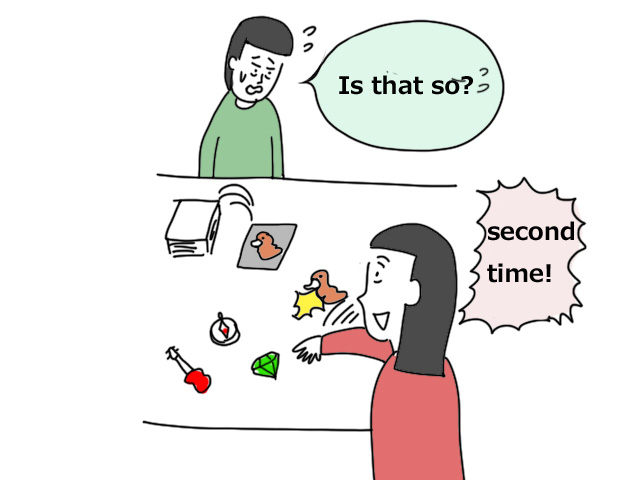 Spread the tiles of various items.

The card on which the items are drawn is turned over in a row.

This hat has appeared twice !

All items are drawn two by two throughout the card deck.

If you think that the item has appeared before, get it.
First come, first served.

Memorising what appeared, the player who got the most tiles wins.

How do we judge that the item appeared for the second time?

The moment the player picks up the tile, we don't judge if the item came out the second time.

We don't check the cards that have been opened so far.

we don't check it.

We continue the game normally.

If an item that has already been picked up by any player appears, it means that the item he picked up didn't come out twice.

Only then will a penalty be incurred.
The player who took it by mistake will drop out.

As a penalty, that player will no longer be able to participate.

But in other words, even if you make a mistake, you can stay in the game until it is proved that it has not appeared twice.

The tiles you picked will remain in your hand, so you will get their points at the end.

You can take the tiles at any time during the game.
Does that mean below?

There are wonderful rules that will never let you play this game like that.

Remove 3 cards at the beginning of the game.
In other words, there are 3 to 9 items that appear only once in the game.

At the end of the game when the deck runs out, we open and check these three cards.

If there is a player who has taken the item in these 3 cards, his point is 0! no matter how many tiles he has got. Perfect loser!

This rule is effective. It's too risky to take tiles by luck.
You can't take a reckless challenge.

The rules of the three cards are outstandingly sharp.

I think the idea of ​​picking up the item that came out for the second time is mediocre, but the method of confirming the correct answer and the rule of the penalty are simple but ultimately beautiful.

Memory is not the only thing that matters.

It looks like a simple game of taking what appears twice, but in fact, it makes complicated profit and loss calculations in the brain.

At the beginning of the game,

If you remember clearly, you'll take it.

Also at the beginning of the game,

If you have a vague memory about it, you shouldn't get out early, so you'll stop.

It's just as vague as last time, but there aren't many cards left, and this time I'll take the tiles. Players sometimes make such decisions.

Even with the same vague memory, the player's decision to take a tile or not changes depending on whether the game is early or late.

Factor ①
There is a difference in the amount of chance between the beginning, middle and end of the game.

Factor②
There is a gradation of memory in the brain.

Factor ③
There is a borderline where you can't take the tile to avoid the risk of 0 points in the gradation of memory.

I think that you make a profit and loss calculation by multiplying such various factors and decide whether to take risks or not, and whether to take tiles or not unconsciously.

By the way, Thai Taro (my husband) who has tendency of hyperactive is weak in this game, so I like this game haha.

It's a fun masterpiece even for two people.
Of course it is interesting to do it in large numbers. I recommend it.